On the walk from the hotel to the boat Friday morning, the palm trees had more bend than usual, and there was a little uncertainty amongst the competitors gathered at the Miami Beach Marina basin as to how the day would go.  With the forecast for breeze out of the East at 22-30 kts with 6-8ft seas, “survival”, “keep it upright”, and “where are the lifejackets?” were just a few of the phrases heard on the dock before we pushed off.

Sailing out to the racecourse a few miles South of Miami Beach, we acclimated ourselves to the conditions by jib reaching at 14-16kts with waves giving the team on Volpe a repeated dousing.  The RC promptly started at 11am and a theme that would stick around for the remainder of the day quickly revealed itself; get right.  There were plenty of shifts throughout the day, but the boats that could make it to the right corner first usually got across the fleet.  This was even true for the boats who had terrible starts, tacked out behind the fleet but could lead to the right side.

After hanging with the top group in the first race, it was clear we would need to be a little more aggressive on our sets and douses as our conservative boathandling was good for sailing clean, but not enough for going from 5th to 1st.  As the day wore on, we got more confident with our sets and douses and our helmsman Ryan DeVos did a great job of keeping the boat exiting low on sets and out of gybes to ensure we did not wipe out. With full weight in the back on the boat, and huge waves to surf down, the sails were getting plenty of action off the wind, and the trimmers had their hands full.

Our speed was generally very good all day, and with the exception of a tough first beat of the second race when we miscalculated the location of the windward mark, we sailed very well and got better throughout the day. Race 1 we battled in the top group most of the race, had a shot at 2nd going into the finish, but a brief collapse of the kite would cost us 3 places with the boats around us who were able to stay roped up and moving fast.  The last race of the day, we put it all together as we started at the boat end of the line, led to the right corner, tacked over on a max right shift of the day and were able to pull of two clean gybe sets and leeward douses while keeping some very good competitors behind us. It is always a great feeling to be the first boat back into the harbor…and the first boat to cold beer! 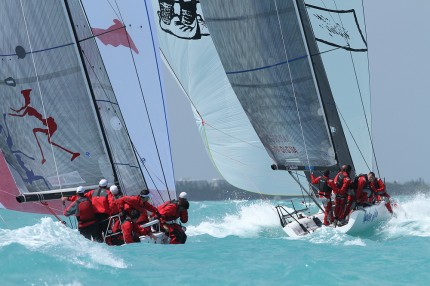 We currently sit tied for 3rd place with our brethren on the other DeVos boat (Delta) who put together a very good day.  In typical fashion, the team on Samba showed good form in the breeze and have a nice lead headed into day 2 which is forecast for similar conditions as today, but slightly lighter. While there were plenty of wipe-outs, ripped sails and general disarray for some boats in the fleet, the overall carnage was very minimal and as the fleet gathered for beers at Monty’s, it was all smiles and salt-caked faces after a great day of 32 racing. 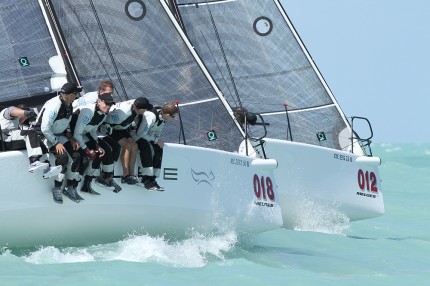