(Cue the harp and haze to resemble a flashback…)

My first experience sailing with Mary Anne took place in 2005 when I was a new employee at Melges and she was my first official “client” after purchasing a new Melges 17.  With a brief introduction of “’Hi, I’m Mary Anne’…’Hi, I’m Sam’…’Let’s go sailing’” we embarked on our maiden voyage.

It was a sunny, spring day on Lake Geneva with a stiff Westerly breeze and temps in the low 70s, but the water still had a cold bite.  We set off from LGYC, sailed upwind into Fontana, set our spinnaker and prepared for our first gybe.  Mary Anne was steering well and as the spinnaker filled on the new side I was full of praise, except there was one problem…she was not on the boat to hear it.  She had missed the hiking straps and fallen overboard.

Despite the cold water temps and an embarrassing blunder in front of a person she had just met, when I was able to retrieve Mary Anne, she was all smiles, and what I would come to learn is that regardless of finishing well or poorly, she was continually full of positive energy and relentless in her pursuit to get better.  After our first meeting, I did not anticipate that our sailing relationship would last for many years and that we would have the opportunity to win a highly competitive Melges 20 regatta.

We sat in 2nd place 5 points behind Paul Reilly’s team on Red Sky after 4 races.  In anticipation of 2 more races and the addition of a throw-out, there were too many permutations of who could win, and the only thing we could do was focus on sailing well and control what was in our realm.  Our motto of the day was, “we have a lot of work to do.” 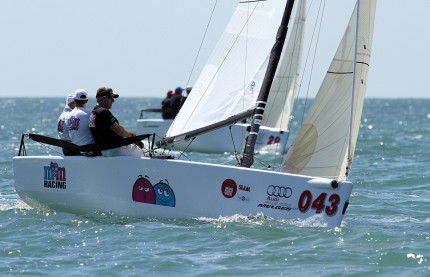 The breeze had blown itself out from the previous day, and we were left with an 8-11 N breeze, which according to the forecasts was going to clock right.  Our formula of starting clean wherever there was room had worked well up to this point, and with the boat-end available we were feeling good about executing our game plan of getting right.  Near the top mark, the right didn’t come in as much as we had hoped, but it was enough to get us around in the top 3.

We did a good job of picking off 2 boats on the next lap, and with about a ¼ of the downwind to go until the finish, one of the more bizarre experiences I have had sailboat racing took place. There were essentially 3 boats dueling for the lead, we were positioned in the middle of the two and still leading, but it was going to be tight.  We could hear the noise of a helicopter and a short time later, it appeared 30 yards in front of us, only hovering 100 ft or so above the water.  The photographers quickly snapped photos and then peeled off the course, leaving behind a swirling torrent of breeze that we could not avoid.  Our sails luffed violently and it took a good 10-15 seconds for normalcy to prevail.  The boats around us remained unaffected and picked up some valuable distance, but we managed to keep our slim lead and took a hard fought, bizarre race win to get closer to the overall lead.

Red Sky took an 8th place which was thrown out for a 4th, and Michael Kiss’ team on Baccio retired from the race when they were holed shortly after the start on a port/starboard which was likely to be grounds for redress.  We tabulated the results, and again came to the conclusion that with three boats in contention, all we could do was focus on sailing our boat well. We still had a lot of work to do.

The final race got underway after 3 general recalls and a black flag start with extremely shifty and unstable conditions.  It seemed like the right was trying to fill, but huge lefties would descend on the course, and there was one point up the first beat when boats on the right and left sides of the course had matching angles on opposite tacks. Throw in a bunch of Miami Vice motor-boats going half throttle, Star boats sailing across our course after completing their 93-boat regatta and getting mixed in with the Melges 24s who were now going upwind with us at the same time…it was like a Packer fan in a Brat shop…madness.

Michael Kiss did a nice job of getting right at the top, and we fought from the left side to round in 3rd just ahead of the 4th place boat.  The top group would remain intact the next lap around, and as the breeze became more unstable we were in a battle as the boat behind us did a better job of staying in the pressure downwind.  When we crossed from opposites sides near the finish, we slipped to 4th and would have to wonder if that was enough to take the regatta win.

The Melges 20 fleet blasts off the line on Day 2 in big breeze...

Overall we finished 1 pt. ahead of Red Sky, but with redress pending for Baccio, any feelings of excitement were muted as our fate was now in the hands of the judges. An agonizing hour passed, Peter and I said our good-byes to Mary Anne and Bill knowing that regardless of how we finished, we sailed very well.  Peter and I stood on the corner of CGYC waiting for a cab to the airport when Michael Kiss and his tactician Chris Rast approached fresh from their meeting with the judges. Knowing we were anxious to hear what happened, Chris informed us they were given average points for the entire series and we had won the event by .6 points.

I immediately called Mary Anne and I am still not certain who is happier; Mary Anne for finally achieving a regatta win, or me for seeing a person who is the epitome of what it means to be good for the sport of sailing be rewarded after so many years of hard work.  Mary Anne is now the only woman helmsperson to ever have won a premiere open championship in any of the Melges sportboat classes, and I am proud to say I was a part of it. Thanks to Peter Keck for being an awesome team member, and to Mary Anne and Bill for having me on the M an M team since 2005.