My goal was to provide updates everyday from Key West Race Week, but after our team on Intac put together a solid Day 4 with finishes of 5, 1 and won the day, I got a bit off track when we ended up celebrating with a few too many refreshments at Turtle Kralls which was adjacent to our slip.  Sure, winning one day out of a five day series does not mean that much in the big picture, but for our first event together as a team and after battling inconsistency, big mistakes, and just plain bad luck, winning a race and Day 4 with a stacked fleet of 32 teams was a huge moment and a nice reward for the hard work that that our young team from the Virgin Islands had put in throughout the week.  Heading into Key West 2011, I was not sure what to expect as I prepared to race with a rookie Melges 32 team in a fleet that is notorious for exposing mistakes.  Luckily for me, I would be the one learning valuable lessons about team-work, effort and that while good results are certainly enjoyable, the process of working hard, having fun and enjoying the people you are with is what makes for a great event.

In the first race on Day 4, we snuck into the top group at the first windward mark and battled with veteran 32 teams Samba, Red, and Leenabarca.  After a few splits, position changes and some boat on boat action, we finished just behind Samba in 5th place, and edged out Leenabarca and Red.  In the 2nd race of the day, we battled through a tough start, managed a very tight cross on port tack shortly after the gun  and found a clean lane headed to the right side.  With eventual regatta winner Goombay Smash to leeward and ahead, and top 5 overall finisher, Yasha Samurai on our hip, I quietly thought to myself it would only be a matter of time before our lane shut off, forcing us back into traffic on the left side.  After a few minutes however, Anthony (mainsheet) and Mark (helm) did a great job of fighting hard to keep the boat moving, and it was not long before we forced Yasha to tack, and crept forward and away from Goombay.  Once at the top of the course, tactician Peter Holmberg called a nice starboard tack layline, and we rounded with a nice lead.  There are some races that you win when you bang a corner and take a bullet, but during this race, we fought hard for our position, built a nice lead and extended as the race went on.   With a taxing breeze in the 5-8 range, temps in the low 80s with 100% humidity, and a team grinning from ear to ear when we reached the dock, it took several mudslides to keep us refreshed. 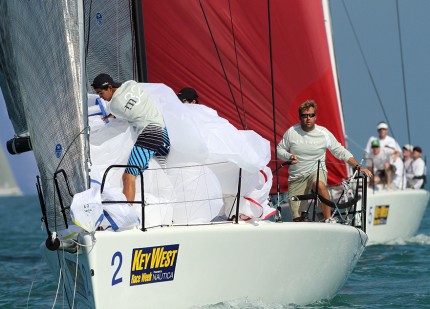 Bowman William Bailey fights to get the kite down, and owner/helm Mark Plaxton sets his sights on a nice leeward mark rounding

With our solid day 4, not only did we prove to ourselves that we could hang with the best in the fleet, but we had now snuck into the top 10 overall which was our goal headed into the week.  On the final day of racing, we did our best to shake off a bit of dust before we left the dock, and en route to the race course, the RC came over the radio and announced there would be 3 races.  There was a bit of excitement on our boat as we were still feeling confident from the previous day and felt we could move up a few more places, but also were aware of that there can also be a lapse in effort and mental focus after good day. 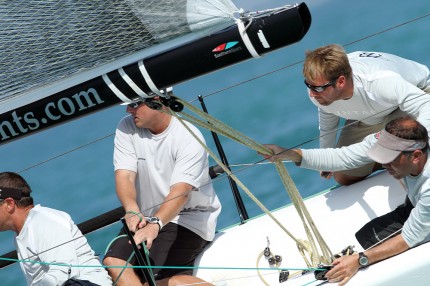 With similar light-air conditions to the previous 4 days, our fast settings were in place, and it was just a matter of getting off the line cleanly and sailing smart.  After a clean start by what I would assess was not more than 6 inches from not being over early, we got clear air and headed to the right side of the track.  With a few storm systems heading north of KW, the breeze was a bit unstable and was anyones guess as to which side of the course it would fill from.  We would soon find out that the left side would come storming in to the top mark with pressure and we were left to battle in the middle of the pack and fought hard to take an 11th.  In the next two races, we would have our work cut out of for us as we were over early in both starts, and would have to sail perfect races to get anywhere near single digit finishes.  Apparently the dust from the previous night was a bit thicker than we originally thought.

In the last run of the regatta, a big right shift descended on the course which meant pulling off a quick gybe set at the offset mark was a neccessity if you wanted to hold your position. Once completed on our boat, our kite filled and we made our way to the finish.  We took a quick look under the boom and saw that 2 boats in front of us could not pull off the move cleanly and we were able to grab a few points, sneak into 11th place in the final race, and win a tiebreaker for 9th place overall.  Our last day was nothing spectacular, but we managed to fight hard and do just enough to secure our goal of finishing in the top ten.  As for the regatta, in typical Melges 32 fashion, the regatta came down to the last race with Goombay Smash stealing a regatta win from Warpath who found themselves OCS in the second to last race. 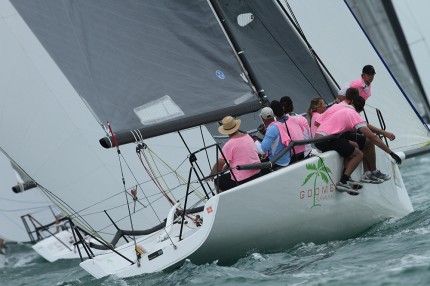 Dougie Douglass' Goombay Smash shows off their North 3Di sails, and their flamboyant pink shirts on the final day of racing en route to a regatta win.

Overall, a very good event for a rookie Melges 32 team.  The best feeling from the event was how the team gelled and improved throughout the week.  We had a bow team of young, talented sailors that were willing to work hard, took on their jobs with some serious aggression, were not afraid to get after it, and went from having no experience on a 32 at the beginning of the week, to being one of the top foredeck teams out there.  Nice work to William Bailey, Topher Kingston-Williams, Leslie Baehr, and Mark Stephenson.  Owner Mark Plaxton from the Virgin Islands made sure that we followed the #1 goal all weekend; to have fun and learn.  It is always amazing what happens when you focus on the process of having fun, instead of focusing on the results themselves.  Thanks to the team on INTAC for a great week of sailing and reaffirming to me some valuable lessons.  Race reports and pictures here.