A common refrain from regatta organizers and sailors when venues experience conditions outside of what has been advertised is, “It’s never like this!”  This phrase could be heard the first few days at the St. Thomas Rolex Regatta where sailors were hoping for consistent 15-18 Easterly Trade Winds, but were instead tested with a fading gradient wind that staved off the reliable trades making for light, shifty and toasty sailing.  While the Caribbean is beautiful and the sailing unparalleled, when the wind shuts off it gets sweltering, and pounding fluids and reapplying sunscreen before and after every race is more than just a cautionary recommendation.

With several other fleets racing, the Melges 32’s were given our own racecourse on the Pillsbury Sound nestled between St. Thomas and St. John which provided a lot of current, ferry traffic and changing conditions. The current was a huge part of the equation and often made for a one-way track both upwind and downwind putting a premium on finding the favored end of the starting line.  With starts that either had us quickly behind the fleet, or poked with the group around us, we had a mixed bag of results through the first two days.

The final day, the RC moved our course to the south side of St. Thomas hoping for steadier wind which we found in the 11-15 kt range.  Starting aggressively, we got off the line cleanly, got our bow out, and had 2 solid races and climbed the leaderboard.  Having a decent last day and stringing together good races was a nice feeling that we have not had on Volpe for the last few regattas and we are hopeful to carry this momentum into the final Caribbean event in April.

When the final finishing gun sounded Volpe finished 4th overall, and our teammates on Delta took overall honors after a well-sailed series. More impressive was after suffering a 2 mid-fleet finishes on the final day and tied with Argo headed into the last race, the team on Delta pulled it together, got the win and a nice Rolex for Dalton. After years of hard-work, crew changes, and results not reflective of effort, it was great to see Delta get the win.

The morning following the raucous awards ceremony at the St. Thomas Yacht Club, Peanut (boat captain-shore crew) and I were the lone rangers finishing the pack up of both the DV Sailing 32s in preparation for the Peter Island event in April.  This involved towing the 32’s to Tortola, and hauling out at Tortola Yacht Services in Road Town which has firmly planted itself in the top 3 most ridiculously hot places I have ever been (#Chaffage).  Starting at 7am, we were able to get our work done before the temps got too unbearable, and had a few spare hours on Tuesday afternoon to check out Tortola.

Peanut was not feeling my Bourdain-vibe of getting in a taxi and exploring for 3-4 hours, so I ventured alone, found a taxi driver named Crabbe who dropped me in Cane Garden Bay, a white-sand, crescent-moon beach with a smattering of shack restaurants and bars mixed with palm trees.  Strolling among a few pockets of beach goers and being envious of the cruising sailboats at anchor filled with families and friends reveling in paradise, I ended up at the far end of the beach at the Callwood Bar (part of the Callwood Rum Distillery).  Climbing up the rickety staircase leading from the water, I surveyed the empty scene inside and was summoned with a warm welcome from the dread-locked silhouette of McAdoo, the lone employee who was viewing the action on the Bay with a pair of binoculars from a shaded corner of the deck.

I pulled up a chair and over the next few hours and a few rum punches, McAdoo filled me in on his adventures of growing up having never left Tortola, and I shared stories of snow, ice-skating and traveling on airplanes.  For two strangers from different worlds, there was effortless conversation and laughter, making for a worthwhile afternoon of aimless traveling.

Check out results and take a few minutes to browse the photos from Joy Dunigan.  Up next is a few days at home and soaking up as much family time as possible before a very crazy month of sailing and traveling in April: 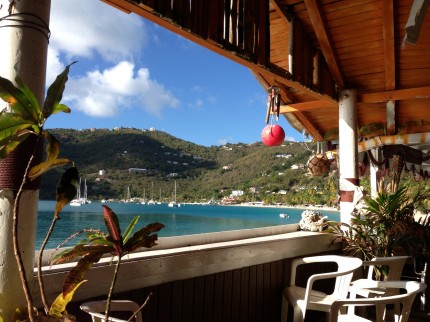 View of the bay and beach from Callwood's 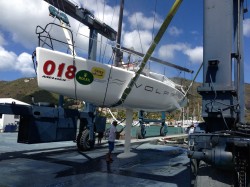 Volpe getting put away in Tortola 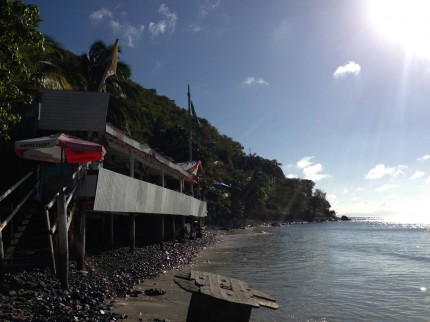 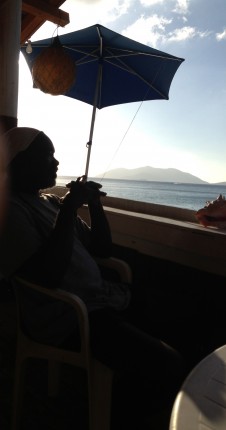